This week I enjoyed watching the movie "Impromptu" about George Sand, the French novelist. She is a fascinating woman and earlier this year I read Elizabeth Berg's historical fiction "The Dream Lover" about Sand.

The cast of "Impromptu" is stellar with Judy Davis playing Sand and Hugh Grant as the young and innocent Frederic Chopin, the man Sand wants and chases. She tells Chopin that he is not a man, his hands, his halo, his wings, he is an angel. She worships the man and his extreme talent.

The movie is filmed entirely in France  in 1991 by an American company and with British actors. Julian Sands plays Franz Liszt. Sand was known for her scandalous behavior, separated from her husband and having romances with famous men, wearing men's clothes, smoking cigars, and breaking many rules. The costumes, the settings and the many famous people she knows add to the pleasure of watching the movie. Below is the cemetery sculpture of George Sand. 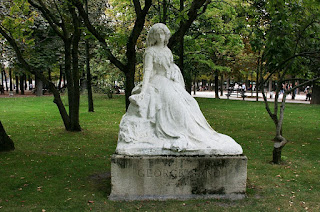 I have not read any of her novels, even though she was the most poplar novelist in France during her life time. Have you read her novels?
Posted by Terra at 5:00 AM

Not sure I've seen the film, but it does sound familiar. On the movies to see list it goes. Thank you for the tip

She sounds like a hoot!
I've not read any of her books, but this movie sounds intriguing.

I have not but I think I will look for them.....and that movie!

I have not read her novels either, but I think I'd like this movie.

Thanks for the recommendation. Will also check out this movie.