Here are some things I am mulling over recently. 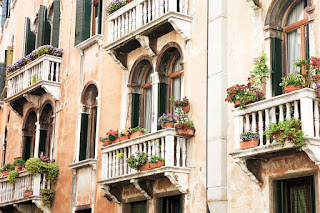 Venice and that screwed up Mose Project, that is being built to protect Venice from severe high water conditions. The Mose Project is far from completion and has a huge cost overrun, now looking like costing $8 Billion dollars. The project began in 2003 and completion date is pushed back to 2023. It is a series of gigantic gates that are meant to rise from the sea floor and protect Venice in time of need, but thus far they can't get the gates to rise. The metal parts are very corroded from being submerged in the sea for three years and mussels and other sea creatures are causing damage to the hinges too. Thus far the gates don't work.
In contrast, the Netherlands built a huge project recently for a mere $500,000,000 dollars, it took only 5 years to complete and it works. Maybe some Dutch engineers could fix the Mose Project?
Did you know that Mose Project is dogged by massive corruption? A former mayor of Venice and 35 other people were arrested. This failure of Italy really bothers me because Venice is a world treasure.
Will the project ever be successfully built? 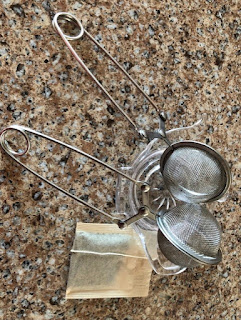 Above are my favorite new kitchen utensils. This kind of infuser is easy to use and to clean and the mesh is fine to hold in most tea.

Tea in Tea Bags
Did you read the article in the Washington Post on September 27, 2019, about how almost all tea bags are sealed with polyproplene, a sealing plastic glue, and when we steep the tea in hot water, microplastic particles get into the tea we drink? These tea bags each release billions of plastic particles into our tea, researchers at McGill University found and a quote from a researcher is "Some of the particles, she noted, would be small enough to potentially infiltrate human cells." I want to see more research on this. Maybe these researchers are wrong!
So when the paper tea bags are "crimped" a plastic glue is used. You can understand that regular glue might not hold up when immersed in hot water. Also some "silkie" tea bags higher end companies use, and that I often buy, are not made of silk but of Plastic. Who wants to immerse tea in a plastic bag and end up drinking plastic microparticles?
So I have switched to bulk tea and tea infusers which work wonderfully well. I am using up my tea in tea bags by cutting open the bag and putting the tea into an infuser, and brewing it that way.
There are tea companies that do not use plastic glue or plastic tea bags. Clipper, Teapigs and Pukka Herbs do not use plastic. Some tea companies fold the paper bags and tie them with a thread. That sounds a lot healthier.
Good news is that most tea companies are hurrying to eliminate this problem and moving quickly to fold and tie the paper tea bags with string, so sealant is not needed.
What shocking news about the pleasure of drinking tea.
Still, if we use bulk tea we can avoid that problem.
Here is some delicious bulk tea I bought recently. It was harvested in spring of 2019 and I like that they tell you when it was harvested. The tea is grown in India and the company is run by a young man in his twenties. 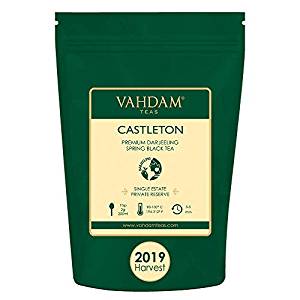 Wow. I did not know this about tea bags. When the container holdin my Earl Grey tea bags, I will see if the local tea place has loose leaf.

I hope the gates will get a make-over via the Danes.

That Mose Project is really sad!
I am now REALLY glad that I am a coffee drinker. Can't wait to hear the results of what they find when they do a study on the Keurig cups! lol
Have a wonderful weekend! xo Diana

My husband gets bulk tea from India!

This was all very interesting and you posted it at the perfect time. Alex and his fiance who was born and lives in London are here for Thanksgiving. She is a true Brit and drinks tea constantly. I use a LOT of looseleaf tea and an infuser.
I hope you had a good holiday my friend.
Blessings,
Betsy

This is all news to me. It's definitely concerning. Thanks for posting about these problems.

Thanks for the info, Terra. It's always good to be aware and to share. I'm not much of a tea drinker but I do have a tea infuser I have yet to use.

The information about plastic in tea bags has been out there for several years, but people for some reason don’t believe it. I contacted two companies a couple years ago and they admit that it is true. However, there are companies whose teabags are “clean”. One company I contacted that makes plastic free bags is Yogi tea, readily available (even at Walmart now!). There are others, and here is one article with other alternatives:
https://pebblemag.com/magazine/eating-drinking/5-minute-guide-to-plastic-free-tea
Tea lovers, unite! 😄

The Weaver of Grass said...

I have recently started to buy loose tea and find it so much more tasty - my favourite is a mixture of Assam and Darjeeling and it is delicious.

WoW!!! i had not read about the tea bags, that's kind of scary!! i use lipton tea, i'm sure they do not have any special sealing solution!!!

Have been drinking tea from teabags for most of my 74 years... and the same goes for water out of plastic bottles (although they may not have been around that long). If there are plastic particles inside me from them, it's a bit late to worry about. I can switch to loose tea, but it seems a bit 'after the fact' (for me anyway). But thanks for the info.

I am so sad to hear about Venice. We were there when it wasn’t flooded and saw what a beautiful city it was. So many treasures. The cost overruns sounds like Hawaii’s rail project which is now astronomical.

What interesting info about the tea bags. I like ordering special flavored teas from tea pig. Sure hope that company will get the problem solved about the sealing solution they are using. We have so much junk going into our bodies.. it's scary.

No, I didn't know that. Well, if I ever run out of tea bags, maybe I'll switch over.

Thanks for sharing the information about tea bags. I have used infusers for awhile, not even knowing about this issue, but because I thought the tea tasted fresher.
The Mose Project corruption issue is heartbreaking. I pray that Venice can be saved while this mess is going on.

Mu husband read that article but he told me that it was the silk bags that were the problem because they were plastic not silk. I pay loos e tea from Larkin Tea Company. Google them. They have some delicious teas you'd not find other places.

Thanks for visiting my blog!! It is nice to meet you. The flooding in Venice breaks my heart. We loved our vacation there back in 2007. Even then there was clearly damage from high waters. I hope they get something done before it is too late. I have been using those tea diffusers for a few years now. They are easy to use and to clean, as you mentioned. Have a good weekend ahead!

I didn't read that article but have tendency to believe it. Tea bags are not the only thing putting plastic into our water. Long ago I switched to those metal tea things you bought (sorry the name escapes me). There are also reusable tea bags on the market but they don't sound so practical to me. Sometimes I do still use bags though because of the practicality or what is available in loose tea. I hadn't thought about the plastic issue in relation to tea. One more thing to think about. Sad about Venice. I haven't travelled there and I'm not certain there will be a good time again by the time I can manage a trip there.

I did read about the teabags being stuck with a plastic glue, read it on the internet somewhere but as far as I know it wasn't reported in our newspaper.
The tea strainer - used to have one of those to put loose tea in to strain it once, long gone now.
Heard about Venice's high water - and didn't know there were gates that don't work, nor about the Netherlands, it appears that was also not reported here in Australia.
However, it's very interesting reading it - thanks.

Whoa! Yesterday I had read about a possible link between particles in the atmosphere from dust, traffic, industrial emissions that are so small they can enter the blood stream and even cells. A government article about PM2.5 (particulate matter) listed a possible link to diabetes. And now my daily cups of hot tea may be another source of concern about PM2.5. I guess I need to get a diffuser and use those scissors until I use up my current stash and can switch to bulk. Heavy sigh!

We knew about tea bags as we compost as much as we can and gave up on tea bags as they never rotted down. I used to use loose tea but these days its not really economical. Loved reading your blog, thank you for visiting mine.

I had never heard of the tea issue. I am so grateful that I came by. A treasure trove of info today. Sincerely thank you. I mean it I just wish I hadn't given away my infusers after last sale. I saved my silver tea thingie that you hold over a cup but that only works if I'm making a pot! grrr

Also thank you for following my little space for so long. I am sorry that I have not been as loyal. I have no excuses. I can see now that I have been missing out on a lot. I'll be wiser in the future.