Musicians I Heard Live from Bob Dylan to B.B. King 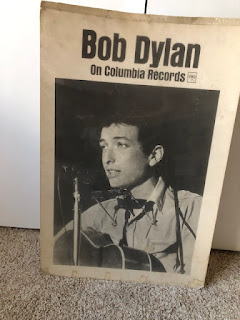 Above is a free standing cardboard sign of Bob Dylan that I got when I was in college and that I am still pleased to have. It is about 40 inches tall. Isn't he young in this photo? He is my favorite singer/song writer/poet. I saw him live in concert a few years ago when he played where I live. I still have the tee shirt I bought that evening, showing a photo of Bob.

My husband Will and I heard B.B. King several times play live in a blues club in Oakland, California. One time B.B. came and sat at our table and chatted with us. What a thrill for us. Will played guitar so it was quite an honor to meet B.B. King in that friendly manner. I couldn't find any B.B. King photos available free to post. 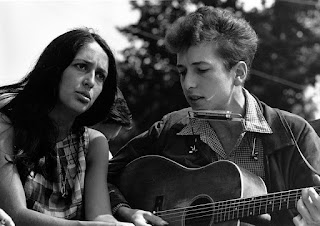 I heard Joan Baez perform live once, her voice is so rich and haunting. Isn't the above photo perfection? The young and talented Joan Baez and Bob Dylan, briefly a couple. I think she wrote the great song about their affair, "Diamonds and Rust."

I heard Del Shannon live in concert in Milwaukee, Wisconsin. His song Runaway is a favorite of mine. 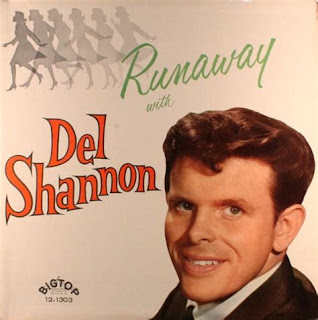 At Fillmore West in San Francisco  my husband Will and I attended many concerts, and loved The Kinks, Fleetwood Mac, Creedence Clearwater Revival, Hot Tuna and The Youngbloods. The Youngbloods was a favorite band, with their song "come on people now smile on your brother, everybody get together and try to love one another right now." We in the audience would all join hands when they sang that song. We saw The Youngbloods in concert live several times. 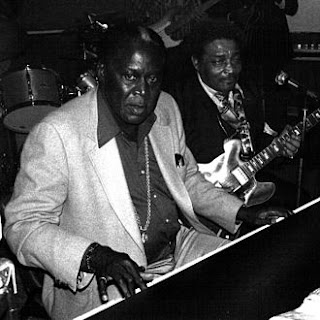 I heard Memphis Slim (in above photo) in a small underground blues club in Paris, France. There were a lot of small clubs in Paris that were built literally underground. As I recall they were called "caves."

Your comments reminded me that I saw a performance of the Bolshoi Ballet when I attended college in Istanbul, and a Shakespeare play (not music, I know) in Statford on Avon years ago.

Who have you heard live?

I was a big Dylan fan, too, but alas I saw Linda Ronstadt and the Stone Poneys in 1970 and that's about it, until my son came along and he dragged me to some concerts in the 90s and early 2000s -- bands you've probably never heard of like Rage Against the Machine, Dream Theater, and more recently The Front Bottoms.

I love your list, lots of my old favorites are on it.

As for me, I didn't see most of these more than one time, but I still remember the thrill:

Elvis (in the early seventies)
The Beatles (1965)
Linda Rondstadt

Dozens and dozens of performers of country and bluegrass music fame

Love the post, it was fun to try to remember some of these shows.

Oh my goodness, I can't remember who all we've seen, but here are a few.
The Turtles
The Birds
Rolling Stones - (Mark saw them in 1969 in CA when he was in C school in the Navy.)
Carlos Santana
Buddy Guy ~ Those were many, many, many years ago!!
Ravi Shankar and his daughter maybe 20 years ago. If I'm not mistaken we saw Bob Dylan around the same time and he was a disappointment, no old songs. He went out with a towel over his head.

Have a great weekend ~ FlowerLady

Baez and Dylan - two music legends. I still remember their duet "Blowing in the wind".

How I love all these legends! I'm a great Bob-Dilan-fan (so sweet young on the photos) and I admire the songs of Joan Baez. Wonderful, that you could hear so many "Classics" in original life.

You have heard some great singers live! I'm not a concert goer - just listen on the radio!
Del Shannon grew up about 5 minutes from my home. One of the ladies in the facility I work at dated him. They still have Del Shannon days - a week long event of special activities in that town!

Debra She Who Seeks said...

Hmmmm, I've heard the Guess Who, KISS, Bay City Rollers, Sonny Terry & Brownie McGee, k.d. lang and a slew of singer/songwriters from various years at the Winnipeg Folk Festival. Mary Chapin Carpenter leaps to mind, the Blind Boys of Alabama, Loudon Wainwright III, etc. etc. Plus a gazillion Canadian singers and bands that would be unknown to you, also same thing for various LGBTQ musical acts over the years.

My goodness you've seen a lot of people. I haven't been to many concerts in the past 20 years or so and in my younger days it was mostly country music.
Oak Ridge Boys
Statler Brothers
Reba McIntire
George Straight
Neal Diamond
Barry Manilow
Gaither Vocal Band
My cousins were the original Doublemint Gum twins and had their own TV show and were on Lawrence Welk a lot. I've heard them sing many times.

Alice Cooper (not my favorite, I went with my sister and a friend)
I know there were more, but I just can't remember them right now.
Blessings,
Betsy

I haven’t heard many singers live, about three that I can think of at the moment. Often when young I was the performer in Church, on the Radio, and in Musical Theatre…
Bob Dylan has written some gorgeous lyrics, Joan does have a lovely voice and visited Australia a few years back.
Was good to read your post as there are lovely memories of these singers.

I've only seen two live concerts. One was America and the other was Jon Bon Jovi. Then of course there were local artists

I've seen a few live performances in the 1960s, mostly in Manhattan clubs.

What a fun topic! Indeed, I might have wet my pants (lol) having BB King come sit at the table. Off the top of my head and in no particular order, I've enjoyed Neil Diamond, Willie Nelson, Charlie Rich, Alan Jackson, Carpenters, Air Supply, Gloria Estefan, Righteous Bros; Crosby Stills, Nash, Rolling Stones, Fleetwood Mac, Billy Joel, Barry Manilow, (the BEST!), Johnny Mathis (worst), and Billy Joel. -- Not because I had $$$ to burn, but I was working in the right place at the right time. Glad for the experiences, but honestly? On account of the crowds, I can't think of anyone I care to see in person.

Oh, what a wonderful grouping of classic wonders, Terra!!!!! Legends!!

Let's see.... who have I heard / seen in-person: the Rolling Stones, Nickelback, Alter Bridge, Slash, Breaking Benjamin, Seether, Skillet, My Darkest Days, Three Days Grace, Shinedown, Sick Puppies, Creed, the Beach Boys, and can't forget the Cowsills back in the 1970s. I think that's it. Who I'd love to yet see but probably won't: Kid Rock and Metallica. Tickets are sooooo doggone expensive these days!!

Bringing back memories.
I lived in Minneapolis most of my life. Haven't seen many but I did see The Fifth Dimension at a shopping mall opening before they were famous. The Nitty Gritty Dirt Band played in the middle of Dayton's department store while I was working there and I got to bring them pops! In concert I saw The Doors (he was so drunk), Jimi Hendrix (excellent!), Steppenwolf (awful), Tommy James, and Alice Cooper (thought it was a female folk singer--what a shock--LOL!). Yup--fun memories.

I'm afraid I can't name many singers here since most concerts I visited were classical music ones; here, however, I saw some of the "great ones" like Anne Sophie Mutter, Alfred Brendel, Sir Georg Solti, Claudio Abbado, Arleen Auger, Emma Kirkby, Kiri Te Kanawa - that's just off my head, I probably forgot some. And of course the wonderful Andrea Bocelli. A highlight during my university years was a concert by Georges Moustaki - I still love his music.

Can't begin to list them all, but I've also heard Dylan and BB King. I saw Dylan a few years ago and King when I was in college. Some of my favorites have been Judy Collins (just after Both Sides Now came out!), James Taylor and then recently James Taylor and Carol King. Soeme of my favorite in-person musical events was seeing Johnny Cash and June Carter at the Grand Ole Gospel Hour at the Ryman Auditorium in Nashville. Still get chills when I think of them singing "Will the Circle Be Unbroken?" Probably the most memorable was a 30th anniversary celebration for Dylan at Madison Square Garden some time in 1990s with an unbelievable lineup. One great regret is never seeing Elvis in concert.

I've liked Bob Dylan and Joan Baez since my teens as well. I don't think I've ever been to a really big concert with world-wide famous artists, though.

I went to an Elvis Presley concert when we lived in Honolulu. The concerts I attend are more classical. I really enjoyed a concert of the New York Philharmoic with Zuben Metta. At Lincoln Center! I guess you could say I am too old to have been into that era of music, my children were. But, in the last few years I have come to appreciate it more.

Hi Terra. Love this post. It is such fun to look back. I haven't been to alot of concerts, but we have seen Garth Brooks, Sonny and Cher, Elvis, Tim McGraw. Loved them all. In case you don't go back to read my comments to you on the blog, I think my stove could be at least 150 years old..Happy Tuesday..xxoJudy

Wow! That is an impressive resume!

Very jealous of those who saw Elvis live.

We saw Bob Dylan after he had become a Christian, he was on Keith Green's album. I'm not sure where he stands spiritually at this time... Enjoyed your post!

Dear Terra, unfortunately, I've never been to a live concert. I know that I've missed out on an experience--the sights and sounds of which would still be with me I'm sure. I have seen several touring companies doing Broadway musicals, but I know that's not the same. Still, I'll never forget seeing "The Man of La Mancha" in Dayton, Ohio. I can't remember who starred in the touring company I saw with friends, but I'll never forget hearing "To Dream the Impossible Dream." I was so idealistic back then--maybe in 1968 or '69, and the song just made me even more so. Then I went away to grad school, got caught up in the VietNam protest, and became jaded about politics, and for a while lost any idealism I'd had. Peace.